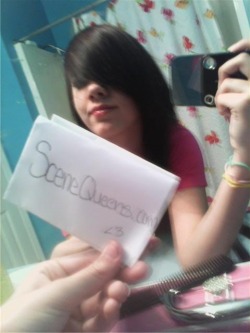 Ok, so basically if you’re on SceneQueens.com you sorta have an idea of what a scene queen is, then again maybe you heard about it from a friend or you heard about it in one of those “My friend knew a guy who knew a guy who dated some ones cousin” type of situation…which is probley rare…but also a little weird. Anyways, so I’m going to tell you a little bit about what scene queens are, well what they are to me, everyone has their own opinions so it’s possible what I think is so not true to you in anyway, but that’s not the point. Scene Queens are girls who are of course scene. They have bitchin hair and wear amazing and awesome clothes, which is their own style. Usually a Scene Queen doesn’t care if you hate them or not, they are confidant and stylish in their very own ways. To me a scene queen is a role model, they show other scene kids, younger ones and kid’s who want to be scene, the correct way to be scene and how to have confidence in themselves. In their pictures their style shines through along with their ability to take a fashion and turn it into a life style and state of mind, show kids that they can be different and happy and accepted by others like them. They take amazing pictures which show true beauty because they aren’t looking like everyone else they are looking like themselves, their style which is usually skinny jeans, bright colors, band tees, lots of bows and head bands, colorful hair, teased hair, random clothes, tight leggings, outrageously awesome animal prints, bright and dark make-up, anime clothing, huge sunglasses, regular tees, etc. is the way most scene girls/guys dress. You DON’T ALWAYS have to tease your hair just to be a scene queen, example: Carley Cannibal is a very beautiful and famous scene queen and in a lot of her pics her hair isn’t teased or it is slightly teased, either way she has it she’s still scene and pretty. Most of the scene queens have the same kind of hair cut and bangs, a lot of them cut their own hair but usually if you’re a beginner at doing your hair or you just don’t know how to cut the right scene hair cut, you can show your stylist a picture of your favorite scene queen and they might be able to cut it for you. To learn how to cut/style/etc. of how to do scene hair or make-up you can go onto YouTube and look at videos also SceneQueens.com (there are some videos about what kind of clothes they wear) One thing a lot of scene queens have is amazing and expensive make-up. KNOW how to put on make-up and how to do it well. A lot of scene queens wear their make-up differently. Some wear it bright and out of this universe while others wear a nicer toned down kind of darker look that is still amazing but not quite show stopping. This article doesn’t explain or teach you how to be a scene queen it just has some of my views on them and hopefully a few tips to help you out. Visiting SceneQueens.com and checking out their pages, pictures, and videos would help you out more than me :]