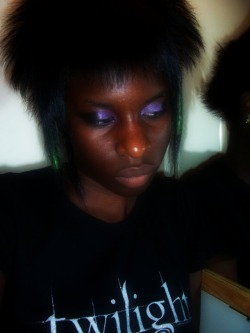 My name is PsychoSatarah and I'm obbssed with makeup. I have one turorial up on youtube and I plan on adding more. I like to create my own looks and I get inspiration from lots of things like cartoons such as PowerPuff girls and Dexter's Labratory and Fruits like Watermelon and well that's the only fruit so far. My friends and I are currently working on a Alice In Wonderland video and I'm doing the makeup for the Mad Hatter character who will not be played by me. I'll be playing The Red Scene Queen xD.
My makeup obbssesion started two or three months ago when I finally watched a Michelle Phan video. Then I found out what scene was and I fell in love with the clothing and the makeup looks of course. I got inspirations from KiKi Kanniball Dakota Rose and Jefree Star(he is AMAZING!). I also searched around for video tutorials for more eccentric makeup looks but I had some trouble then I found JurikoLuvsHIM and she did amazing tutorials and I fell in love with that. And thats part of how I found this site xD.
Now I do my own makeup tutorials and I do my friends makeup though I still need some help on doing it on other people's faces cause I don't think they have manicans for that. I like to experiment with a wide variety of bright and dark colours though I REALLY like the neon bright colors. I'm still also building up my makeup collection. I'm just getting to my second bag because the first one was filled. My favorite type of makeup is mascara, I'm not exactly sure why but it is and I love my new one which is Maybelline XXL Pro. I really like the Hard Candy line at Wal-Mart and TokiDoki at Sephora and I was REALLY excited when I saw it there for the first time. So that's me and what I do. PsychoSatarah the Makeup Princess. xD
SceneQueens Forever!
Peace, Love and Music = Happiness