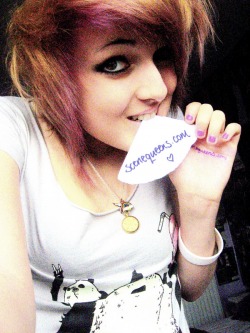 I've always wanted to be different. Ever since I can remember, I was the 'weird one'. I was the girl who'd rather listen to rock music than pop. The girl who'd rather stay at home and draw pictures and play guitar than go out and play with friends. I was always that weird, quiet, outcast one who would sit at the back of the class. I had my friends, sure, but I always felt like none of them understood me. When I was about 13 I discovered 'scene' and I knew what I wanted to be. I would spend hours at a time, on the internet, looking for ideas. I was fascinated by all these scene girls and people like Jenn Curbstomp and Brookelle Bones became my idols. I don't really fit the general 'scene' thing - outgoing, confident, loud, funny.. I'm quiet and shy and awkward and i'm not as pretty as any of the scene girls out there. But I've found my OWN scene style and even though it doesn't stand out as much, that suits my personality so I'm happy with it. Scene, to me, doesn't mean fitting in with all the other scene girls. It's about having your own interpretation of the style and not just copying everyone else. It's about following a trend, but still being YOU at the same time.