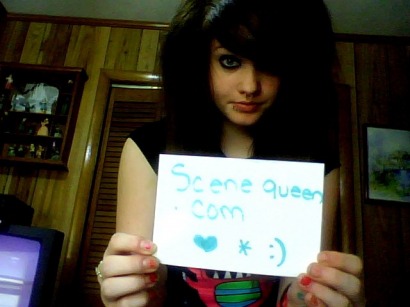 Scene is not about the clothing you wear or by the big hair you have. Being scene is much more than that being scene is by showing the world who you really are and letting the world see how beautiful and unique your style is. Being differant is not a bad thing and if people say that than they dont know what they are talkin about. So dont caring what others think and what others say about you because they dont know what its like to walk on the other side of the road. Scene is what you are as a person scene doesnt make the person scene is inside you. The scene queens,kings, and kidds are one big loving family that you are apart of they dont care what color skin you have or where you came form because everyone is unique in there own way.Being yourself is the best think it shows that you have passion in yourself and thats all people can hope for. Thats why I look up to the Scene Queens and Kings because they show us that its ok to be different, and that the world is not going to end because everyone doesnt look the same. When you enter the scene world, their are people in all shapes and sizes. Some people became scene because they see everyone else doin it and if you see others doin it you think you should follow them but thats not true you should strive to be yourself.  But if your just doin that to follow others then scene is just not for you. when Some people look at us all they see is the piercings or how many we have but they never see the loving, thoughtful and caring people that we are. They think we are no good and they think we dont have any respect in our selfs well you know what we do. I knew i was differant and i thought that no one got me, my own mother didnt understand me but she trys and thats why i love her for that. When i found the scene world i found were i belong and were i can be myself, were others understood me and felt the same way that i did. My little brother and sister thinks being scene is being emo but its not, scene and emo are two differant kinds of worlds.Sure we may have the same hair and sure we may like the same kind of music  but we are not the same. Once i knew all of that i  knew i was scene and i started to take a stand. Becoming scene was the best thing that ever happend to me and let me tell you this i fuckin love every little thing about it because you know what its me. Yea thats right im labeling myself and you know what who the hell cares so what if some people call me a poser. The only way you can be a poser its say that your something than turning around sayin your not thats what makes you a poser in my book. When you say your scene that means you're proud of being yourself, that you not only knew in you mind but in your heart that you are scene. If they call you a poser or a fake just stick  your middle finger up and say those 2 little words FUCK UP because you know what im proud of who i am and if you dont like it than who the hell cares. So what im trying to say is scene is a lable im proud to carry. Thats what being scene means to me and maybe even others!!