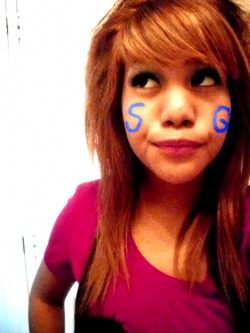 So maybe you’ve scrolled a bit through the Scene Queen site and wondered to yourself, how do I become part of the Scene Queen family? In my opinion the first set of queens that emerged were Brookelle Bones, Kiki Kannibal, Hanna Beth, etc. These set of models all have one similar trait in common, confidence. Confidence is a very important key to becoming a Scene Queen. When you seem confident through your pictures, whoever views your pictures see the same effect. Another vidal trait to portray as a Scene Queen is creativity. Having your own perspective to your pictures will separate you from the rest of the other queens. Experimenting in your pictures wouldn’t be anything harmful to try. Try to be a diamond in a rhinestone world. (: