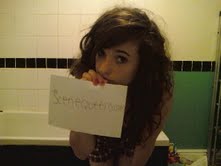 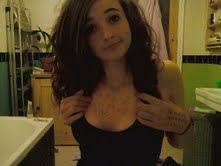 OKay so we've all seen them scene guys and gals before, in their typical tight-and-bright skinnies, big and by big i mean BIG layered hair and their kick-ass band tee's. Scene kids are often miss-classes as emo's but they're not the same. There are manymanymany waays that you can become one of these sceene kids, but here's a quick few for you.

SELF CONFIDEENCE!..
No matter where you are if you want to be a True scene, you are gonna' get some laughs-and-looks. There's always going to be some nutter that doesn't like, you and will make that point clear, but hey we can't please everyone, thats just like the moon being made out of cheese, impossible. If you're going to be scene, you'l need to be prepared for those dirty looks and nasty comment, and you're going to have to deal with them, but hey who CARES what people think,  be yourself, and love yourself, and thats the way to go, go with YOUR flow, not with the newest trend.

SCENE HAIR+FAYCEE!
Guy's and Gal's. If you're going to be a classA scene you are going to NEEd the hair do. Pick one that suits you, if you've got a big personality Get BIG-BRIGHT hair to match it. OH and don't forget the fringe/bangs, you're going to need those. A good idea is to get Some extraextraextra hold hair spray to keep that do in place. Get some nice choppy layers in that hair ad you're half way there. The fayce, well make-up. Invest in some black eyelines, yellow eyeliner, pink eyeliner, while you're at it just buy the whole rack or liner, likely hood is you'll use them, do a look that suits you, pale foundation is the usual look and some nice big black eyes should do the job (:

ACCESORIES!
Just a quick list of some jewls you might need/like to wear if you're thinking of becoming scene, invest in som diamond shaped jewlery, earing, necklace. Belts, piercings, sunglasses, and the like all play a huge role in your scene appearance. Big belt with BRIGHT random prints on and a BIG belt buckle would be good, also if you have a white studded belt THAAT would be awesome. Remember that a few peircings here and there are awesome but don't get too many that you're scaring kids off.