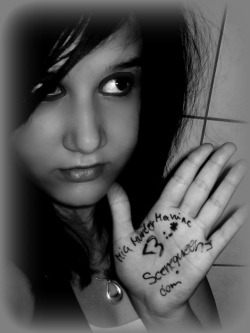 The scene fashion is  recognized for its hairstyles. Popular looks include long side-swept bangs, sometimes covering one or both eyes. Also popular is hair that is straightened and dyed black. Bright colors, such as blue, pink, red, or bleached blond, are also typical as highlights in scene hairstyles. Short, choppy layers of hair are also common. This fashion has at times been characterized as a fad. In the early 2000s, scene fashion was associated with a clean cut look  but as the style spread to younger teenagers, the style has become darker, with long bangs and emphasis on the color black replacing sweater vests.