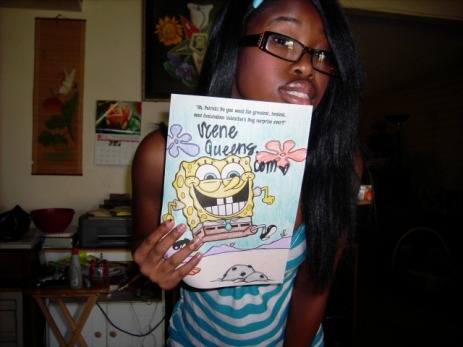 So my first encounter of the scene world was when I was in the 9th grade when I saw a picture of Audrey Kitching on photobucket. I obviously had no idea who she was but something about those pictures I saw made me want to dress in that fashion and such. I later saw a picture of Melissa Millionaire and from there I started my scene transformation. It was of course very subtle at first because I was worried about what people would think and say because I am a black girl but dressing differently and acting differently which isn’t that big of a shock since I am considered an oreo.   I went all out scene my sophomore year and it was one of the best decisions I made. I became more girly through all this and more confident about myself, I cared less about what people thought of me.  I was one of the first people to wear colored skinny jeans at my school before it was popular and all my “friends” made fun of me yet once lil wyane does it its okay and cool. I later met other people who had the same since of style, music etc as me, and I think that the one thing that I loved about scene kids was like they were little big kids, which is pretty much how I am in a way. Being scene has changed my life as a person it helped me become more outgoing and willing to try new things and made me careless about what people will think if I like this band or want to wear this outfit or whatever.  Now people always ask me how I get my hair a certain way or wear I buy my clothes and accessories. So being scene means a lot to me considering that’s how I found myself as a person.   :)